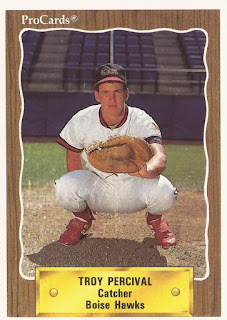 John Lackey started the game and Troy Percival closed it out. This was Percival's 300 career major league save and Lackey expressed to The Associated Press pride at being involved in the milestone.

"He's such a professional and such a great guy to play with," Lackey told The AP after the July 2004 game. "I have no idea how many of my games he's closed out, but most of the time when he comes in, it's pretty much over."

Percival reached that milestone save in his ninth-straight season of at least 27 saves, four all-star seasons and one world championship. He went on to notch a total of 358 saves. In his last big year, 2008, he saved 28 for the eventual American League champion Tampa Bay Rays.

Percival achieved all that having started on the other end of the battery. He played his first professional season as a catcher.

Percival's career began in 1990, taken by the Angels in the sixth round of the draft out of the University of California Riverside.

Percival played his first pro games at short-season Boise and he played them behind the plate. He got into 29 games and hit .203. In an early September game, a errant pick-off throw from the catcher allowed the winning run to score.

Then came Percival's switch to the mound. Percival later recalled getting pitching inquiries in college, but he wanted to catch.

"So in hindsight, I might have cost myself a higher spot in the draft, but I did what I wanted to do," Percival told USA Today in 2001. "I gave it a chance, and once I saw all the other players, I realized I was generic behind the plate."

Percival played all of 1995 in the majors, serving mostly in middle relief. He saved three games. He then moved to the closer's role for 1996, saving 36 games, posting a 2.31 ERA and earning his first all-star selection.

Leading up to the 1996 All-Star Game, Percival explained his approach to The AP.

"I believe some guys go out there and think too much, try to be too fine," Percival told The AP. "I'm not a nitpicker. I go out there aggressive and throw."

In 2002, he helped his Angels to the playoffs and to the world championship by saving 40 games, with a 1.92 ERA. He saved three Anaheim's World Series wins, including both Game 6 and Game 7.

Percival stayed the Angels through 2004. He then played 2005 with the Tigers and 2007 with the Cardinals. His 2007 season came after he announced his retirement due to a forearm injury. He'd missed the entire 2006 season.

But he came back. In 2008, the 37-year-old signed with the Rays and saved 28 games, though he missed the playoffs. His final big league time came back with the Rays in 2009.

After his first retirement in 2007, Angels manager Mike Scioscia recalled Percival as his reliable closer.

Percival "always wanted the ball with the game on the line," Scioscia told MLB.com. "Saving Game 6 and Game 7 of the World Series ... that's quite an accomplishment."