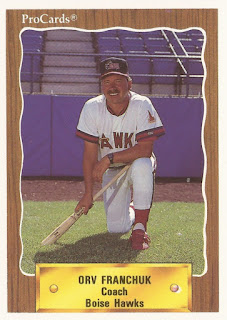 Orv Franchuk listed off some of the highlights of his career to Canada.com in 2007.

He served as a Red Sox hitting coordinator in their championship in 2004. He won a scholarship to play college ball at Pepperdine. He coached the Canadian National Team at the 1981 International Cup in his home province of Alberta.

"I just look at my life as a sequence of things that happened that built up to where I am," Franchuk told the site on the occasion of his induction into the Edmonton Sports Hall of Fame. "I'm in a better place now than I've ever been in my career."

Franchuk started his professional baseball career in the late-1970s as a scout with the Reds. He previously served as a teacher in Edmonton after his stint at Pepperdine, his playing career ended with an Achilles tendon injury.

He joined the Angels system in the mid-1980s as a coach. In 1989, he served as a coach at single-A Quad City. In 1990, he served at short-season Boise. He jumped to the Athletics system by 1995, serving as hitting coach back home at AAA Edmonton.

That 1995 season proved a turning for Franchuk, according to The Edmonton Examiner. He signed on with the Athletics to coach in their system. He had continued to teach over the years.

"Oakland said we want you to come on full time, you need to make a decision," Franchuk told The Examiner in 2011. "You're either going to continue teaching or you're going to come and do the baseball thing. It just seemed like the right time and I'm happy that I did because it turned out really for me."

He managed at short-season Vancouver in 2002, served as a coordinator with the Red Sox in 2004  and hitting coach at AA San Antonio in 2009. He managed his independent hometown Edmonton Capitals to the 2011 league title.

In 2013, he served as hitting coach at AA Chattanooga, watching over Yasiel Puig on his rise to the majors.

“The thing that impresses the most about him is his street smarts," Franchuk told NBCLosAngeles.com. "He's not a Harvard guy, but he figures stuff out. Sometimes you get guys from underdeveloped countries in that condition because they've had to fight and scratch and steal just to survive every day. He's that kind of a guy."
1990 Minor League Tally
Players/Coaches Featured: 2,360
Made the Majors: 973-41.2%
Never Made Majors:1,387-58.8%-X
5+ Seasons in the Majors: 407
10+ Seasons in the Minors:244
Posted by Steve78 at 10:28 PM