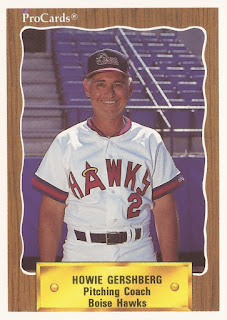 Former St. John's University athletic director Jack Kaiser could give nothing but the highest praise for longtime university pitching coach Howie Gershberg in 2012.

Gershberg spent 12 seasons with the school, helping it to 10 NCAA tournament births and sent players to the pros, including the likes of Frank Viola and John Franco, according to RedStormSports.com.

"Howie was a wonderful coach, teacher, colleague and friend," Kaiser told the site. "He's one of the top men I've ever met in my life. He knew how to reach his players and they listened and carried out his instructions."

Kaiser made the comments at the dedication of the Howie Gershberg Bullpen at the school's Jack Kaiser Stadium. St. John's dedicated the bullpen to Gershberg nearly a decade after Gershberg's passing in 2003 at the age of 67.

Gershberg went on from St. John's to a professional career that saw him spend more than a decade as a coach in the minors. He coached as high as AAA Vancouver. He turned to coaching after a brief playing career in the 1950s.

Gershberg's career in baseball began as a 19-year-old in 1955. He played that year at Class D Thomasville with the Dodgers. He then moved to the Giants and Class D Sandersville and Muskogee, ending his playing days.

Gershberg soon started his coaching career in high school, according to a flier promoting naming the St. John's bullpen for him. He coached at East Islip High School, then joined St. John's in 1974.

At St. John's, he helped coach the school to two College World Series appearances. Two of his hurlers won national ERA titles. Three of his pitchers reached the majors, including Viola and Franco.

He then went through Palm Springs and Lake Elsinore. In August 1996, The Los Angeles Times visited Gershberg at Lake Elsinore and called him a cult figure among pitchers who sought out his advice.

"Howie knows what he's doing, but a lot of guys know what they're doing," Angel General Manager Bill Bavasi told The Times then of Gershberg. "But not everyone has the patience. That's a good combination for working with young players. Howie has the patience."

In 2003, as another one of Gershberg's pupils, Marlins pitching coach Wayne Rosenthal prepared his Marlins hurlers for the World Series, Rosenthal thought of his ailing former coach at St. John's.

"I say this not because he's sick right now, but Howie Gershberg, my pitching coach, who's a legend in pitching, he's the one that changed my career around," Rosenthal told The New York Daily News. "He taught me a pitch (a slider) that got me drafted, got me to the big leagues and made my career."