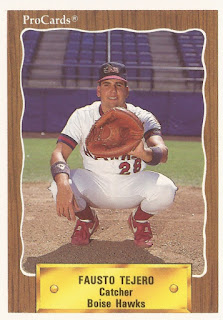 The Braves' backup catcher dinged up in spring training 1997, coaches prepared for a possible new catcher to take his place, according to The Spartanburg Herald-Journal.

"Tejero is the most experienced," Braves manager Bobby Cox told The Herald-Journal.

Tejero might have been most experienced, but his experience all came in the minor leagues. That year marked his eighth in pro ball. He went on to play in 11 seasons. His services weren't needed in the majors in 1997 and he never made the bigs.

Tejero then went on to work in law enforcement back home in Florida and earn awards. But charges brought in 2009 and later dropped ended that stint.

Tejero's baseball career began in 1990, taken by the Angels in the 14th round of the draft out of Florida International University.

He started with the Angels at short-season Boise. The catcher hit .216 there over 39 games. A runner knocked a late throw home from Tejero's grip in an August game, scoring the winning run.

He moved to single-A Quad City for 1991, then AA Midland and AAA Edmonton for 1992. He got into 84 games at Midland that year and eight at Edmonton, hitting .191 overall.

Tejero stayed in the Angels system through 1996, getting time at AAA in each of those subsequent years. He didn't make Anaheim.

For 1997, he signed with the Braves. Despite the talk that spring, he didn't make Atlanta. He played the year at AAA Richmond. He hit a two-run double in a May win there.

Tejero singled in the winning run in an early 1998 spring game for the Braves, but he returned to Richmond for the season. He singled and scored in an April game there.

He returned to the Angels system for 1999 then moved to the Phillies for 2000. After being one of the final cuts in spring 2000, he played out the year at AAA Scranton, ending his career.

By 2003, Tejero started work as a sheriff's deputy for the Broward County Sheriff's Department, according to The South Florida Sun-Sentinel. He subsequently won Employee of the Month honors twice.

In October 2009, though, the department arrested Tejero, accusing him of being an accomplice to a fellow deputy's marijuana-house extortion scheme.