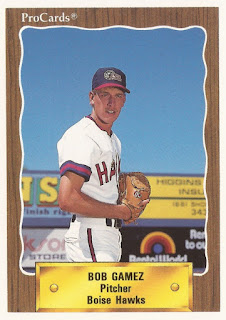 Bob Gamez spent his career trying to prevent home runs. In 1994, he got to hit one.

Playing for the AAA Phoenix Firebirds, Gamez hit one over the right field fence, according to The Arizona Republic, the first of his career.

"I didn't want to show anybody up," Gamez told The Republic afterward. "Everybody told me I should have slowed down to enjoy it more. I probably won't hit another."

Gamez hit his first professional home run as a pitcher, having started his career as a position player. He moved to pitching in his second year and went on to play in a total of nine pro seasons. He made it as high as AAA, but he never made the majors.

Gamez's career began in 1988, taken by the Rangers in the 29th round of the draft out of Chabot College.

Gamez started with the Rangers in the rookie Gulf Coast League. He started as an outfielder. In 31 games, he hit just .170. He picked up a double and a triple, but no home runs.

Gamez also got two outings on that mound that first year. In his second, he turned pitcher full time. He returned to the GCL and posted a 3.76 ERA over 23 outings.

He moved to the Angels and short-season Boise for 1990. He started a game in August, going six innings, giving up a single run. He got into 14 games, starting seven and ended with a 2.91 ERA.

At the end of spring training 1994, the Angels traded Gamez to the Giants for Steve Hosey. Gamez proved a bit of a mystery to Giants manager Dusty Baker, at least early on, according to McClatchy News Service.

"I don't know much about him," Baker told McClatchy. "But (GM) Bob Quinn likes him. We'll send him to Phoenix and see what he's got."