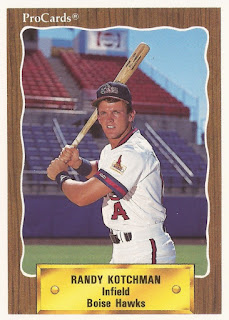 Randy Kotchman's American Legion coach described Kotchman to The St. Petersburg Times in 1985, comparing him to his two older brothers.

"Randy's not a real power hitter," Post 273 coach Bill Brinkler told The Times. "He likes to use the whole field, that's the sort of way Tom was."

Kotchman went on to follow his brother to the pros, but his stay turned out to be limited. He played two seasons and never made AA. He's gone on, however, to teach others to use the whole field as a youth instructor.

Kotchman's pro career began in 1989, signed as a free agent by independent Miami of the Florida State League out of the University of Central Florida.

Kotchman started as a pro with Miami. He got into 44 games there, hitting .276, with nine RBI.

Kotchman then signed with the Angels, who assigned him to play at short-season Boise. His manager there: His brother Tom Kotchman.

That August, Kotchman hit three doubles in a game, leading his team to a 5-3 win, according to The Spokane Spokesman-Review.

Kotchman finished the season with time in 56 games. He hit .244, with 24 RBI and six stolen bases, ending his career.