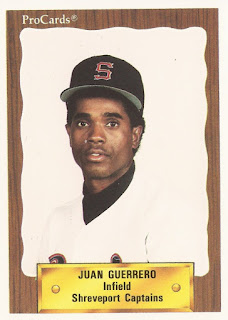 Juan Guerrero's first major league home run came in a big spot in July 1992, according to The Associated Press.

It came in the 12th inning of a game against the Pirates, sealing an Astros win, The AP wrote.

"I am just a little bit excited. I knew I hit it hard, but I didn't think it would go out," Guerrero told The AP. "I don't play enough to think about home runs, but my first one is pretty exciting."

Guerrero went on to get into a total of 79 games for the Astros that year, but the home run ended up being his only one that year and ever.

Guerrero's career began in 1987, signed by the Giants as a free agent out of his native Dominican Republic.

He then made the Astros out of a strong spring training in 1992. He singled in the winning run in one March game. He knocked three doubles in another.

Guerrero debuted with the Astros that April 9. Over his 79 games that year, he hit .200. He knocked in two of his 14 RBIs in an August game.

The season over, Guerrero returned home to the Dominican Republic for winter ball. That January, he got arrested. Police said they found him in a hotel lobby possessing a pipe with crack cocaine residue, according to The AP.  He later attacked reporters at a court appearance.

The Astros responded by placing Guerrero on the restricted list for the season, reinstating him in October and sending him to AAA Tucson.