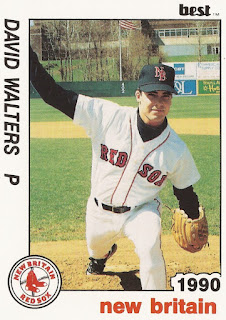 That year, Walters ended up saving 12 games a step away from Boston, at AAA Pawtucket.

"I guess the biggest thing about David is that he has a real good makeup," Kenney told The Morning Star. "He's the type that pitching coaches and managers like."

Walters played just one more season. He wasn't able to take that makeup to the majors. By that point, however, Walters had taken his makeup to the Soviet Union as part of a tour to teach the game there, and understanding.

Walters' pro career began in 1986, taken by the Red Sox in the 12th round of the draft out of Campbell University in North Carolina.

That September, Walters joined a group of other Eastern League players on a tour of the Soviet Union, the Diamond Diplomacy tour. After returning, Walters told The Morning Star he was ecstatic about being invited to go.

"I think it was an invaluable experience for me," Walters told The Morning Star. "I'd go back over there to play on a touring team again."

Walters returned to New Britain for 1990, getting into 43 games, with a 3.13 ERA. In early July, Walters picked a runner off first.