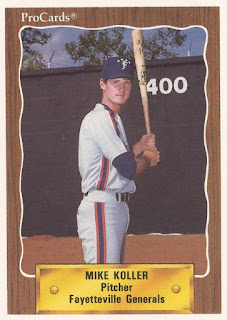 Mike Koller struggled in mid-1989. By the end, though, he showed improvement, according to The Fayetteville Observer.

He improved, according to The Observer, because he improved his mechanics.

"Koller is now getting his arm up," Fayetteville manager Gene Roof told The Observer. "We've been telling him that all year. He's decided the last two starts that he was going to do it. Now everything is thrown out of the same (arm) location."

Whether it was his arm location or something else, Koller couldn't keep it up. He returned to Fayetteville for nine more games in 1990, marking the end of his brief career.

Koller's career began in 1988, taken by the Tigers in the 32nd round of the draft out of Glen Este High School in Ohio.

At Glen Este, Koller had a one-hitter and a two-hitter, striking out 20 batters between the contests, according to The Cincinnati Enquirer.

He moved to single-A Fayetteville for 1989. He went 5-9 there over 26 starts. His ERA crept up to 3.35. He had a May span where he didn't give up an earned run over three starts, but still got a no-decision each time.