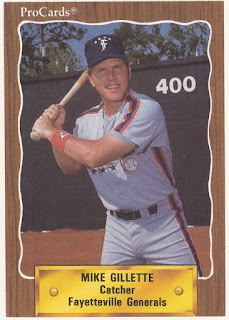 Mike Gillette gained his name, at least in Michigan, in one sport, football. His heart, though, was in another, baseball.

Gillette's head football coach at Michigan, Bo Schembechler, in October 1986 noted both the kicker Gillette's past as a high school quarterback and his dabbling in another sport, baseball.

''He's an excellent quarterback," Schembechler said, according to The Orlando Sentinel. "He's got a great arm and I think he'd be competitive at the position. But he's got this baseball syndrome. He thinks he's Johnny Bench.''

Gillette, an all-state quarterback in high school, turned kicker in college. He kicked well enough to still be named in 2009 as the school's second best at the position.

But Gillette went on to pursue his other sport, his baseball syndrome leading him into pro baseball. He went on to play three seasons. He never made AAA.

Gillette's baseball career started in 1990, signed by the Tigers as a free agent out of Michigan. He went to Michigan to play both baseball and football in 1985 out of St. Joseph High School.

On the gridiron, Gillette made a number of high-pressure kicks, including a 34-yeard, time-expiring kick to beat undefeated Iowa in 1986. He also made 57 total field goals and had two over 50 yards, according to iSportsWeb.com.

The Iowa kick came after two timeouts, one from Iowa and the other a television timeout. The team recognized the Iowa timeout as an attempt to ice Gillette. It didn't work.

On the baseball field, Gillette served a dual role in an April 1988 game, scoring the winning and pitching an inning of relief for the win.

The Royals drafted Gillette out of Michigan, taking him in the 34th round of the 1988 draft. But Gillette never played in a season for the club.

His first recorded pro time came in 1990 with the Tigers. Assigned to single-A Fayetteville, Gillette played catcher. He got into 62 games there, hitting .161. He also got into 23 games at high-A Lakeland, hitting a similar .161.