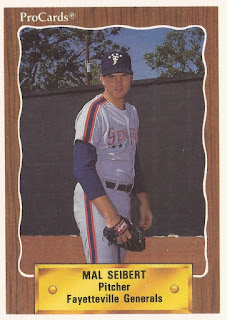 The first thing scouts look for at a tryout for high schoolers is foot speed, then arm strength, Diamondbacks scout Mac Seibert told The Gadsden Times in 1999.

He spoke to The Times at an evaluation camp, among 20 such camps he ran at the time for Arizona.

"I think this is a good training ground for the kids to come out to be evaluated on a professional level," Seibert told The Times. "Whether or not they are a prospect or not, at least this gives them some idea of where they stand in relationship to professional baseball players."

Siebert once stood with professional baseball players himself, if only briefly. Siebert played two seasons as a pro, making it to single-A Fayetteville in 1990.

He has since gone on to a long career as a scout. In 2016, he continues as a scouting supervisor for the Mets.

Seibert's career in baseball began in 1989, taken by the Tigers in the 36th round of the draft out of Jacksonville State University. Seibert has also been credited by his formal name Malcom Seibert and as Mal Seibert.

At Jacksonville State, Seibert knocked in a run on a single in an April 1988 game. He closed out a May 1989 game, picking up the final three outs. He also made the All-Regional Tournament team.

With the Tigers, Seibert started at rookie Bristol. He got into nine games, starting four. He gave up six earned in 20.1 innings of work.

He moved to Fayetteville for 1990. He got into seven outings, giving up four earned in 10 total innings of work. His career ended after a total of only 16 professional outings.

Seibert soon started his scouting career. He scouted for the Braves in 1994. He moved to Arizona by 1999, then Tampa Bay for 2000.