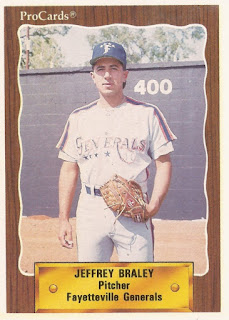 Jeff Braley recalled is coaches trying to change his pitching motion as a kid, but he stuck with it, according to The Fayetteville Observer.

The motion Braley stuck with: Sidearm.

"I think it's more natural to throw sidearm," Braley told The Observer. "I think everybody throws like that when they first start out (as a youngster), but then they start throwing overhand. I kept throwing sidearm and I guess I was successful."

Braley's career began in 1989, signed by the Tigers as a free agent out of Western Michigan University.

Braley started with the Tigers at rookie Bristol. He turned in a 2.05 ERA over 23 relief outings. He also saved six games.

He moved to single-A Fayetteville for 1990 and became the team's closer. He won nine games, saved 27 and finished with a 1.87 ERA. He also made the league all-star team.

At high-A Lakeland in 1991, Braley continued his closing ways. He saved 24 games over 61 outings, and had a 2.62 ERA. He picked up his 12th save with a perfect four-out performance and his 16th save in a July game, striking out two in the ninth.

Braley made AA London for 1992. He saved six games and had a 2.53 ERA. He gave up two hits while getting four outs in an April game.