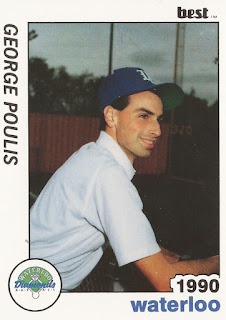 By 2009, George Poulis had more than two decades in as a trainer, both in the minors and in the majors, most recently as the head trainer of the Toronto Blue Jays.

In that 2009 campaign, a senior board of athletic trainers honored his work by voting him onto the 2009 American League All-Star team's medical staff, according to MLB.com.

Poulis continues as head trainer for the Blue Jays in 2016, marking his 14th season in that post.

Poulis' career as a trainer began at Baldwin-Wallace College in Ohio, where he graduated with a bachelor's degree in health and sports medicine, according to his Best card.

His first pro time came with the Cleveland Browns in the NFL, according to his card. He then moved to baseball and started with the Padres in 1989. In 1990, he served as trainer at single-A Waterloo.

Poulis stayed with the Padres for a decade. In 1998, he joined the major league club for the World Series, according to his Bullpen entry. He spent that 1998 season as head trainer for the AAA Las Vegas Stars.

That August, he assessed a non-throwing elbow injury to hurler Creighton Gubanich somehow suffered on a plane ride. "He's doing much better today," Poulis told The Las Vegas Sun about the injury. "He should be fine."

Soon after, Poulis took a job with the Blue Jays as assistant trainer. In mid-2003, he became the major league club's head trainer. He helped respond to two unusual staph infections in 2006.

In 2008 and 2009, Poulis worked with outfielder Scott Rolen, who went through multiple disabled list stints. After Rolen moved on, Rolen named Poulis specifically when The Toronto Sun caught up with him in Cincinnati, telling the paper "I enjoyed Toronto, fans, teammates, trainer George Poulis."