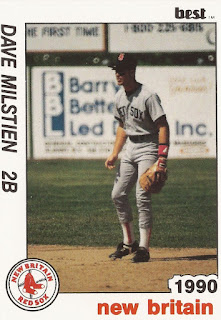 Dave Milstien had made AAA by 1992, but he hadn't yet made the majors. To the Los Angeles Times in July 1992, Milstien said he was still determined to make the majors.

Quitting then, in his seventh season as a pro, he told the Times, would be a waste.

"Getting to the big leagues is not about how old you are or how many years you've been playing," Milstien told the Times. "It's when they think you're ready."

Milstien went on to play in a total of nine professional seasons. But he never played in the majors.

According to a story years later in the Ventura County Star, he did get called up to Boston once, but was never activated. He then never got back.

Milstien's career began in 1986, taken by the Red Sox in the 8th round of the draft, out of Simi Valley High School in California.

Milstien signed, then was sent to short-season Elmira. He isn't recorded as playing that year, though. His first recorded playing time came in 1987, at single-A Winter Haven. He hit .221 over 100 games.

Going into 1987, Milstien told the Times about the experience of finally being a professional.

"The whole thing is hard to comprehend," Milstien told the Times. "You get a dream and you go for it. But still, when it happens, it takes you by surprise. It kind of takes your breath away."

Around that time, Milstien got called up to Boston, according to the Star. But he wasn't activated because the player he would have replaced went on to play.

Milstien moved to the White Sox and AAA Nashville for 1994 and then the the Brewers system for 1995.

His career over, Milstien returned to Simi Valley with his wife, Kim. The two met when Milstien played for New Britain. The two soon married and traveled together as Dave's career progressed. In 2012, Kim Milstien became CEO of Simi Valley Hospital.

"It's a rough life," Kim Milstien told the Star in August 2012. "There's a lot of travel and a lot of time spent at the park. It's very unpredictable. Your life is not your own."