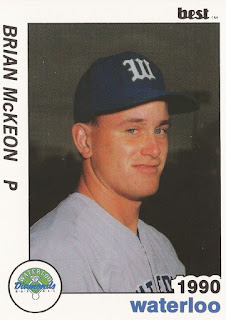 McKeon played for Hanson in 1988 and 1989 at Madison College, striking out 102 batters in 67 innings. He also had a streak of 28.1 scoreless innings pitched, according to the site.

"Butch McKeon epitomized what a coach wishes for in an athlete," Hanson told the site. "He was a rather quiet individual with a burning competitive fire. You never worried about anything less than a full effort with Butch. His love and dedication to the sport of baseball was a joy to behold."

McKeon went on from Madison to turn pro and play five seasons. He never made the majors, but he did go on to be a college pitching coach.

His old coach's words came with McKeon's induction into his old college's Hall of Fame. They also came two years after a 1998 farming accident that claimed McKeon's life.

McKeon's career began in 1989, taken by the Padres in the 14th round of the draft out of Madison College in Wisconsin. Before heading to college, McKeon pitched his high school ball at Pecatonica High in Blanchardville, Wisc. McKeon was also known by his given name, Brian McKeon.

At Pecatonica, McKeon went 13-1, while striking out 189 in 92 innings, according to The Milwaukee Sentinel. He also made the local all-star game.

With the Padres, McKeon played his first season between the rookie Arizona League, short-season Spokane and single-A Riverside. He got two outings at Spokane, going two scoreless with a save in late August.

McKeon also got to pitch in the Northwest League playoffs for Spokane. He gave up two runs in one outing. His manager Bruce Bochy praised him to The Spokane Chronicle.

"I like the way he throws ... he showed a lot of guts," Bochy told The Chronicle.

McKeon made high-A High Desert in 1991. He then started 1992 there, before moving to the Brewers system mid-season. He played the rest of the year at single-A Beloit and high-A Stockton.

McKeon went on to coach a local Blanchardville team. He then served as pitching coach at UW-La Crosse while he finished his degree. He then became a freshman football coach at a high school, according to Madison College Athletics.

He died Sept. 11, 1997 in Blanchardville from a farming accident.