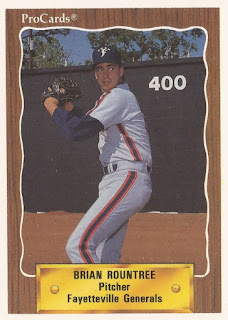 Louisiana Tech signed a new pitcher in 2003 and pitching coach Brian Rountree was the reason, according to The New Iberia Daily Iberian.

By then, Rountree had spent decade as a coach, after a brief playing career in the pros. He continued at the school for another decade after.

Rountree's career in baseball began in 1989, taken by the Tigers in the 41st round of the draft out of the University of South Carolina.

At South Carolina, Rountree arrived in February 1988, going seven innings in his debut. He then threw a complete game in an April victory.

Rountree arrived with the Tigers for 1989, playing that year at short-season Niagara Falls. He went 3-5 over 12 starts, with a 4.82 ERA. He then moved to single-A Fayetteville for 1990. He got into just six games, giving up seven earned in 4.2 innings, ending his brief career.

Rountree then started his coaching career, serving as an assistant at South Carolina for four years. He then moved on to Louisiana Tech in 1996 as pitching coach.

In 2001, he tried his had at being a head coach in collegiate Coastal Plain League. He explained the difference in the roles to The Greensboro News & Record that July.

"As a pitching coach, you're making corrections, things with mechanics, you're really locked in on that," Rountree told The News & Record. "Now I've got to consider the offensive end of it. What's going on, what are we trying to do - the strategy of the whole game."

Rountree continued at Louisiana Tech into 2014. Louisiana Tech head coach Wade Simoneaux, who served at the school with Rountree from 2003 to 2014, explained the importance of Rountree's work in a university bio.

"Brian's tireless efforts at recruiting have put our ballclub in a position to compete in this conference," Simoneaux told LaTechSports.com. "Since I've been here, our recruits have gotten better and better. And he has developed many pitchers that were borderline college pitchers when they got here into possible draft choices."