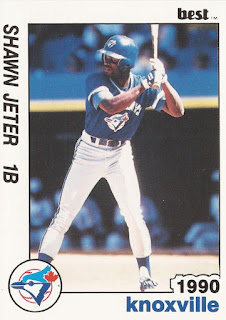 Shawn Jeter called his season at AAA a learning experience, telling The Chicago Tribune that it helped him a lot.

"Hopefully," Jeter told The Tribune in September 1991, "I can take what I learned from Triple-A and do a little something up here."

Jeter spoke to The Tribune after starting his second sting in the bigs. He'd been up for a week earlier in the season. Now he was up again as a September call-up.

Some of what Jeter hoped to use in the majors he also presumably learned from his father. Jeter's father was former major leaguer Johnny Jeter, who played in the majors for four clubs in six seasons, from 1969 to 1974.

The younger Jeter's professional career began in 1985, taken by the Blue Jays in the seventh round of the draft, out of Woodlawn High School in Louisiana.

With the Blue Jays, Jeter started in the rookie Gulf Coast League, moving to short-season St. Catharines in 1986.

Jeter first made AA at Knoxville in 1988, hitting .248 in 80 games. Jeter returned to Knoxville each of the next two seasons. He then hit AAA Syracuse in 1991.

In July 1991, Jeter moved to the White Sox in a trade, playing out the year at AAA Vancouver. He returned to Vancouver for 1992, then made Chicago.

With the White Sox, Jeter debuted June 13. In five games that month, Jeter got two hits in 10 at bats. He then returned Sept. 21, but he didn't get another hit.

Jeter played the next year back at AAA, but it was his last season in affiliated ball. He's recorded with a season in Mexico in 1995 and a season in independent ball in 1997, ending his career.

Playing at AAA Syracuse in 1991, Jeter received praise after scoring the game-winning run in the 11th inning. Jeter beat out a grounder, moved over on a sacrifice, then beat a throw home after a defensive miscue, according to The Toledo Blade.

"They had a good runner in Jeter," Toledo manager Joe Sparks told The Blade.