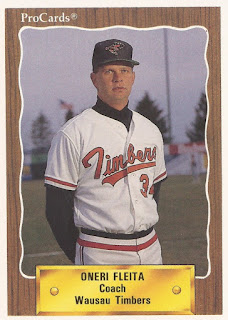 The Cubs let Oneri Fleita go in 2012, but team president of baseball operations Theo Epstein still had good things to say on Fleita's way out.

"All of us with the Cubs owe Oneri a debt of gratitude for his tremendous service to the organization over many years," Epstein said in a statement, according to ESPN.com. "Oneri has impacted countless people here in a positive way, and we wish him well as he continues his career elsewhere."

Fleita spent more than a decade with the Cubs in various capacities, including scout and vice president for player personnel. He started his coaching career in 1990, after a brief playing career. He played two seasons. He didn't make AA.

Fleita's professional career began in 1988, signed by the Orioles as an undrafted free agent out of Creighton University.

At Creighton, Fleita hit .408 in 1988. He also hit 30 doubles, second-most in the country, according to his ProCards card.

With the Orioles, Fleita hit .222 at short-season Erie. He also had five home runs and 16 RBI. He then moved to high-A Frederick for 1989. He knocked in a run on a single in an August game, one of 29 RBI he had on the year. Overall, he hit .238, ending his brief playing career.

Fleita then started his coaching career. He coached 1990 at single-A Wausau, coaching at third. He then moved with the club to single-A Kane County. He served as manager for the Orioles in the rookie Gulf Coast League in 1993 and 1994.

Fleita then arrived in the Cubs system. He first served as manager at short-season Williamsport for 1995 before becoming a scout.

By 2004, Fleita was the Cubs' director of player development. In 2009, he explained his role to The Chicago Tribune. Part of that role was to recommend players ready for the majors, The Tribune wrote.

"It's been a lot of fun," Fleita told The Tribune. "Look, when you work with Jim Hendry and (assistant general manager) Randy Bush and Lou Piniella it's a great gig. I look at it this way, they give all these guys a chance when they come up."