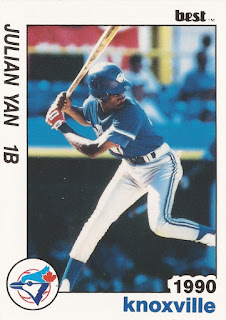 Julian Yan got his team off to a fast start in this June 1989 game. He did so with a first-inning home run.

"He threw me a screwball, away and I hit it well," Yan told The South Florida Sun-Sentinel afterward. "I was looking for a fastball."

For Yan, it wasn't much different than he'd been doing the entire season, except this home run was hit in the Florida State League All-Star game.

Yan was in this fourth season as a pro that year at single-A Dunedin. He went on to get credit for 22 professional seasons, many of those in Mexico and even one in Korea. With all that time as a pro, though, Yan would never get credit for time in the bigs.

Yan's professional career began in 1986, signed by the Blue Jays as an undrafted free agent, out of his native Dominican Republic.

Yan first made AAA in 1993, at Syracuse. In 91 games there, he hit .266 with seven home runs. In early September, Yan had a shot to save his team from a 1-0 loss, but Scranton pitcher Brad Brink knew how to approach him.

"Yan, he's a good fastball hitter," Brink told The Wilkes Barre Times Leader. "I knew I could throw the breaking ball for strikes, so I wasn't going to mess with it."

Yan continued at Syracuse the next year, but only played in 34 games. For 1995, Yan landed with the Expos at AAA Ottawa, hitting .280 over 114 games. His last time in affiliated ball came in 1996, with 48 final games at Ottawa.