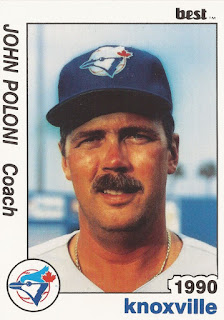 Even though the player could be described as scrawny, according to The San Francisco Examiner, Poloni knew it could work.

"I was not afraid to push him in the draft meeting," Poloni told The Examiner in September 1999 as the player, Tim Hudson, had a breakout rookie campaign. "His stuff was so nasty."

Poloni's career in baseball began back in 1975, taken by the Rangers in the sixth round of the draft, out of Arizona State University.

That year in 1975, Poloni helped his Sun Devils to the College World Series. There, Poloni threw a four-hitter, eliminating Oklahoma 1-0.

With the Rangers, Poloni started in the rookie Gulf Coast League, moving to AA Pittsfield. He returned to AA for 1976 at San Antonio, going 11-7, with a 3.40 ERA.

"That's the second shutout in a row I've lost," Poloni told The Spokane Daily Chronicle afterward. " That's not really important. The important thing is we won. But it would have been nice to have the shutouts."

By September, for Poloni, it was presumably nice to be in Texas. Poloni debuted with the Rangers Sept. 16. In two innings, Poloni gave up one run.

He got his second chance two weeks later, on Oct. 2. He started that game, went five innings, giving up four earned runs. But he also got the win. That second chance also ended up being his last.

Traded to the Red Sox for 1978 with cash for Hall of Famer Fergie Jenkins, Poloni spent the year at AAA Pawtucket. After not pitching in 1979, Poloni got his last significant time in 1980, with the Blue Jays at AA Knoxville.

In 1994, still with Syracuse, Poloni spoke to The Albany Times-Union about veteran hurler Randy St. Claire.

"He just knows how to pitch," Poloni told The Times-Union of St. Claire. "He knows what to throw. He knows the hitters. He's a veteran and knows what he's doing."