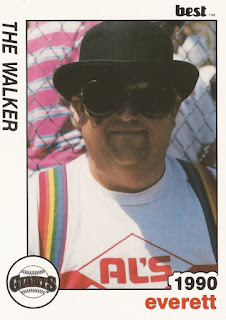 Jim Averill seemed to do a little bit of everything for the Everett Giants in 1987, according to United Press International.

Averill officially served as the club's director of stadium operations, UPI wrote. He worked on the grounds crew and did clerical work before games. During games, he walked the stadium, keeping fan's happy.

"I just like everything about my job," Averill told UPI that July. "I wish I made more money, but the money I make I almost feel guilty about because I enjoy being here so much. It's in my blood."

Averill took on another fan-pleasing persona the next year - one still talked about in 2015. In 1988, Averill became "The Walker."

Averill entertained Everett fans for more than a decade until a stroke slowed him and a second took his life. He passed away in 1998 at the age of 45.

Averill's roots in baseball ran deep. He was the grandson of Hall of Famer Earl Averill and nephew of major leaguer Earl Averill, Jr.

With Everett Jim Averill made his own baseball name.

"You don't want to be standing in the aisle when Tom announces The Walker," team media relations specialist Charlie Poier told The Seattle Times in 1991. "It may be silly and it may be corny, but the fans really love to watch.

The "races" consisted of Averill as The Walker starting at second base, The Times explained. The kid started behind him. Averill won about half the time.

He also hated to lose, Everett PA announcer Tom Lafferty recalled to The Times in 2008.

"Everyone in the crowd knew this, so things were pretty intense," Lafferty told The Times. "The crowd would be on its feet yelling and screaming. It was serious stuff."

His final season on the basepaths came in 1995. That off-season, Averill suffered his first stroke. He recovered enough to throw out the first pitch in 1996.

Averill recovered enough to eventually work at the park again. He even hoped to return to his old persona. He passed away in August 1998 of complications from a second stroke.

Asked in 2015 by the Everett AquaSox Web site about which on-field promotions and contests stood out, Lefferty again turned to Averill - 17 years after his passing and 20 years after Averill last walked the Everett bases.