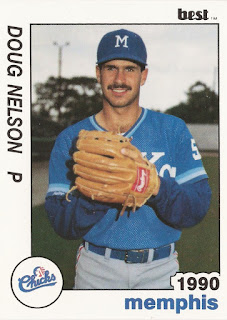 Included in that pitching staff was 24-year-old reliever Doug Nelson, then a veteran of two minor league campaigns.

"We've got so many young pitchers, we're going to have to concentrate and hopefully they'll come out OK," Silverio told The Ledger.

Nelson turned out mostly OK statswise by season's end, picking up 12 wins in 34 appearances, five starts. But he wasn't OK the next, getting just seven outings, ending his career short of the majors after four seasons.

Nelson's professional career began in 1987, taken by the Royals in the 19th round of the draft, out of the University of the Pacific.

At Pacific, the year he was drafted, Nelson, as a starter, threw nine complete games, with 121.1 total innings pitched. The year before, he threw seven.

With the Royals, Nelson started at short-season Eugene. He also moved to relief, getting 22 outings and five starts. Overall, he had a 5.25 ERA, saving three games.

In late-May 1989, Nelson got one of his starts, throwing eight innings of four-hit ball without giving up a run, picking up his seventh win. He picked up a win in relief in late-June, with an inning of work.

For 1990, Nelson moved up to AA Memphis. But he got just six outings there, with one start. He gave up five earned runs in 15.1 innings of work. He also is credited with an outing back at Baseball City, but that proved the extent of his pro career.