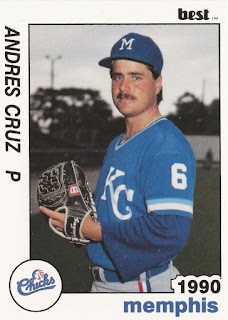 The outing for Andres Cruz wasn't the best. Still, though, it was pretty good - and it led to a Memphis win.

Cruz went five innings in this April 1990 game for the AA Chicks, giving up four hits, three walks and a single run, sending Memphis on to a 5-3 win, The Orlando Sentinel wrote.

Cruz was pitching for Memphis, having just started his affiliated career. He went on to play just two seasons in the Royals system, but he played several more in his native Mexico.

Born in 1964 in Mexico, Cruz' professional career began by 1988, playing for the Yucatan Lions, of the Mexican League.

By 1990, Cruz' Yucatan team had an agreement with the Royals, the Royals purchasing three contracts from Yucatan. Among those contracts was that of Cruz, according to the 1997 book International Sports Law and Business, Volume 2.

With the Royals, Cruz was assigned to AA Memphis. There, Cruz got 28 starts, going 8-12. He also posted an ERA of 3.67. In September, Cruz was on the mound as starter in the league championship-clinching game, a 5-3 Memphis victory.