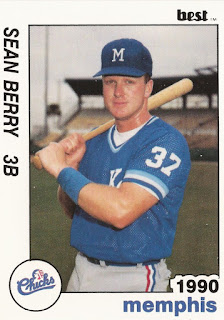 Sean Berry had a new team and his new manager was glad to have him.

"Sean knows what his abilities are. He's not going to try to do any more than what he's capable of doing," Astros manager Terry Collins told The Victoria Advocate in March 1996. "That's why he's a good player. He doesn't try to be more than he is."

Berry had just been traded to the Astros, from Montreal. He would stay there for three seasons, becoming a regular at third.

Berry went on to a career that spanned a total of 11 major league seasons, playing his first big league game in 1990 and his last in 2000. He would also later return to the Astros, first as a coach in the minors, and later as a coach in Houston.

Berry's professional career began in 1986, taken by the Royals in the first round of the January secondary draft out of UCLA.

He started with the Royals at short-season Eugene, moving to single-A Fort Myers in 1987. He made AA Memphis in 1990, then Kansas City that September.

He then played 1992 at AAA Omaha, before a late-August trade to the Expos. The trade got him back to the majors for 24 games. Then came his breakout season.

In 1993, Berry returned to Montreal, getting into 122 total games, hitting .261. He also hit 14 home runs and knocked in 49. In late-September, Berry even started a triple play.

With the Astros, Berry hit .281 his first year, hitting 17 home runs and knocking in 95. In late-August, Berry even knocked in six runs in a game, the second time in his career he'd done that.
The six-RBI performance came after three days off.

In 1997, Berry started the year in a slump. By the end of July, though, he finally started to break out, getting five hits in six at bats.

"It's been a pretty embarrassing season for me," Berry told The Associated Press. "I just hung in there and didn't hang my head. I worked hard when I wasn't playing. But this doesn't change.

Berry continued playing through 2000, ending his career with the Brewers and Red Sox.

Berry stayed with the Astros into 2010. Along the way, he had a bout with cancer. After being let go in July 2010, Berry looked back on his job as hitting coach, and helping young Hunter Pence and Michael Bourn become All-Stars. Berry served as hitting coach at AAA Norfolk in 2015.

"The young guys got to the All-Star Game, Michael this year and Hunter last year. I'm very proud of them," Berry told MLB.com in 2010, "but the best part of my job - the young guys coming here with their eyes wide open and trying to teach them what's around the corner. It's the best part of what I do."