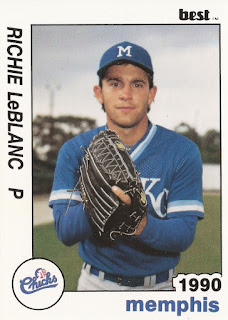 Richie LeBlanc pitched his way to his 10th win for LSU in May 1986, his ninth complete game on the year.

He did so by recording 18 outs by ground balls and striking out three, The Associated Press wrote.

"I just wanted them to hit it on the ground," LeBlanc told The AP afterward, "and let the defense take care of it."

LeBlanc would take that pitching style the next year to the pros, signing with the Royals. LeBlanc, though, would never the the opportunity to take it to the majors, making it to AA, but no higher.

LeBlanc's pro career began in 1987, taken by the Royals in the 10th round, out of Louisiana Tech.

At Louisiana Tech, LeBlanc spent the summer of 1986 playing collegiate ball in Alaska. With the Mat-Su Miners, LeBlanc threw another complete game in July, going the full nine and giving up two earned runs in a Miners win.

"When our defense is hot, I can win," LeBlanc told The Anchorage Daily News afterward. "And I was fortunate the wind was blowing. There were a couple balls that might have gone out."

For 1988, LeBlanc moved to single-A Baseball City. There, he went 8-0, with a stellar 1.89 ERA. He also made the Florida State League All-Star team.

His work at Baseball City earned LeBlanc a promotion to AA Memphis. At Memphis, LeBlanc got 13 starts, but went 5-6, with a 4.03 ERA.