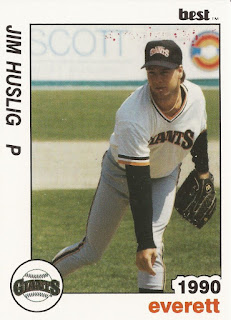 James Huslig wanted this game bad, he told The Oklahoman of Oklahoma City. What he also wanted, as he realized he was close, was a no hitter.

The University of Oklahoma right-hander got both.

"I didn't even realize I had one until the bottom of the sixth inning," Huslig told The Oklahoman after the May 1989 seven-inning affair. "I knew I couldn't let it affect me. I still had to throw strikes on the corners and not get stupid and throw it down the middle to just get out of the inning."

From his time at Oklahoma, Huslig moved on to the pros. His pro career, though, was brief, just 14 outings, 13 starts in a single season.

Huslig started that brief pro career in 1990, taken by the Giants in the 23rd round, out of Oklahoma. Huslig chose the Sooners after first being drafted by the Orioles in 1986 out of Shawnee Mission East High in Kansas.

While at Oklahoma, Huslig also played summer collegiate ball. In summer 1987, he played with the Nevada Griffons. With Nevada, Huslig went seven innings in an 11-4 win, doing well enough to catch the eye of his manager, Sam Riggleman.

"If there were any surprises," Riggleman told The Nevada Daily Mail, "I'd have to say (James) Huslig was exceptional. He's a gamer."

The next year, with Oklahoma, Huslig is credited with earning first-team All-Big 8 honors. In 1989, he won second-team honors.

With the Giants, he started at short-season Everett, getting two outings there, one start. He gave up four earned runs over eight innings, including three runs in a June outing.

Moving to single-A Clinton, Huslig got 12 starts, posting an ERA of 2.55. Huslig, though, didn't return for a second season, his pro career ending with just those 14 total appearances.