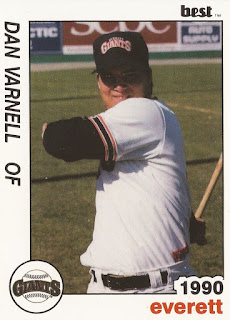 Dan Varnell's teammate Lee Sammons pointed to one strength for that 1990 short-season Bend team, Varnell silently pointed to another.

"We don't have much power on the team," Sammons told The Spokane Chronicle after a 5-3, come-from-behind Bend win. "This is the way we score runs. If we're five, six runs down, we're still going to run."

Varnell had a role in that win, but it wasn't with his speed, it was with his power. It was Varnell who tied the game up in the fifth inning, with a solo home run, according to The Chronicle.

Varnell's career began in 1990, taken by the Giants in the 34th round of the draft, out of Foothill College in California, after high school at Mountain View. At Mountain View High, Varnell won All-Peninsula honors in 1988 as a catcher.

With the Giants, Varnell started at short-season Everett. But his time there was brief, just four games. He picked up one hit in nine at bats.

Soon, though, Varnell was on a new team, independent Bend. There, Varnell got into 35 games, hitting .316, with two home runs and 15 RBIs.

That season in 1990, though, those 39 total games in the short-season Northwest League, ended up being Varnell's only games as a pro. He didn't return for 1991.