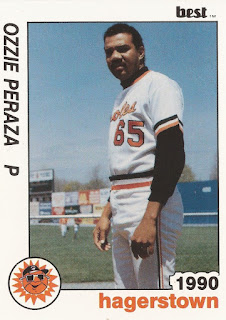 Oswaldo Peraza gave up a few hits, but he still got his first major league win.

Peraza got the start for the Orioles in June 1988. He went into the eighth inning - and gave up eight hits. His Orioles went on to win by a score of 4 to 2.

Peraza went on to pick up four more wins for the Orioles that year, in his eighth professional season. Peraza went on to play a total of 10 seasons as a pro. Those 19 outings in 1988 ended up being his only time in the majors.

Peraza's career began in 1981, signed by the Blue Jays as a free agent out of his native Venezuela. Peraza is also credited as Ozzie Peraza.

Peraza played his first three seasons with the Blue Jays getting limited time in the rookie Gulf Coast League. His first time elsewhere came in 1984 at single-A Florence. He went 8-7 there, with a 3.41 ERA over a full season.

Late in 1987, the Blue Jays sent Peraza to the Orioles in a trade. He made spring training in 1988, then made the big club in Baltimore.

Peraza made the team out of spring training in time for the club's forgettable 21-game opening losing streak. Peraza took two of those losses.

Peraza stayed with the club through most of April. He then returned in late-June and played through early September. He picked up a 6-0 win over the Rangers in early July, giving up six and striking out seven. In August, he notched his fourth win on an eight-hit performance.

Overall, Peraza went 5-7 for the Orioles, with a 5.55 ERA. It was the extent of Peraza's major league career.

Peraza isn't recorded as playing in 1989. He then returned in 1990 to play briefly between AA Hagerstown and high-A Frederick. He then finished out his career in 1991 between Hagerstown and AAA Rochester.