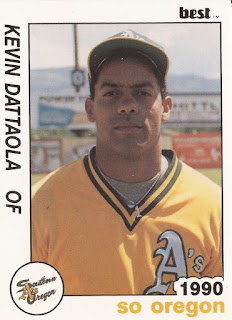 The independent Albany-Colonie Diamond Dogs needed a hitter for the stretch run and rival Adirondack's Kevin Dattola seemed like a perfect fit.

Except, according to The Schenectady Daily Gazette, it didn't seem Adirondack would put Dattola and his 17 home runs on the block.

"He definitely would help our team, but I'd be shocked if they would trade him," Voelker told The Daily Gazette. "He's their best player. He's the kind of guy you build a team around."

By that point, Dattola was deep into the second half of his career, spent in independent ball. He spent four seasons in affiliated ball, making it as high as AAA, but not the majors.

He then moved to the independent circuit and played eight seasons there. His last extended time came in 2001 at independent Somerset.

Dattola's career began in 1990, taken by the Athletics in the 15th round of the draft out of the University of South Florida. He has also been credited as Kevin Dattaola.

Dattola started with the Athletics at short-season Southern Oregon and single-A Madison. Dattola hit .292 between them, with 27 stolen bases. He tripled and scored in a June game for Southern Oregon.

He played 1993 between Huntsville and AAA Tacoma. He hit a career-high 10 home runs that year at Huntsville. In 25 games at Tacoma, Dattola hit .193. It was his final season in affiliated ball.

Dattola then moved to independent ball. He played 1994 at Winnipeg, hitting .291 there with nine home runs. He returned there for 1995, also getting time in Mexico.

He arrived at Adirondack in 1998, winning Northeast League Player of the Week honors in June. He went 14-31 that with, with one home run and 10 RBI. He hit .309 overall there. He also got 15 games with New Jersey.

Dattola went on to be a coach for the Somerset team. He also served as a hitting coach in the Rangers system and as a coach for New Jersey.

"We are all very excited to have Kevin back in a Patriots uniform," Somerset president and general manager Patrick McVerry said in a release announcing Dattola's return for 2007. "As we celebrate our Tenth Season Anniversary, it’s a great opportunity to bring back one of our best players who continues to be a fan favorite to this day. We feel Kevin will bring a lot of experience and help make us a better team."
1990 Minor League Tally
Players/Coaches Featured: 2,189
Made the Majors: 929-42.4%
Never Made Majors:1,260-57.6%-X
5+ Seasons in the Majors: 391
10+ Seasons in the Minors:234
Posted by Steve78 at 11:59 PM