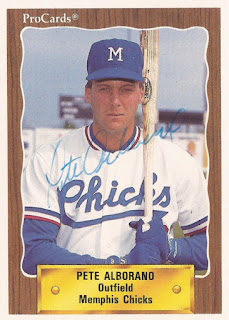 Pete Alborano wonders if maybe the Royals promoted him too quickly in 1989.

He had the best batting average of anyone in the league, .337. He also made the league All-Star team.

But the best batting average doesn't always mean batting title. Alborano his 77 games and 279 at bats left him short of the official batting championship. He came up short because the Royals took notice of his success and moved him up to AA Memphis before he could qualify.

Leverage is what the 29th round draft pick seemed to lack through much of his career. That season between Baseball City and Memphis - his fourth as a pro - marked a career high in games played at 92.

He went on to play in seven seasons, he never played in more games in a single season. He also never made it higher.

"I often ask myself," Alborano said, "'Wow, I wonder if someone was in my corner and gave me a little bit more of an opportunity to show my stuff and play every day on a regular basis, what I could have done."

Alborano still played professionally for seven seasons, getting much of that time two steps away from the majors.
Alborano spoke to The Greatest 21 Days recently by phone from his Long Island home. He covered his career in the game from its start playing for his father at Brooklyn College through his time playing in the minors for the Royals and then the Phillies.

Alborano played his first two seasons with short-season squads in the rookie Gulf Coast League and the Northwest League. His first time with a full-season team came in 1988 at single-A Virginia.

Alborano remained in the Royals system, but he played for Virginia, a co-op team made up of Royals minor leaguers and others.

Alborano wasn't sure how to take the assignment to a team outside the normal Royals system. Still, he went out and played well. He made the Carolina League All-Star team. Others making the team, he recalled: Bernie Williams, Albert Belle and Kent Mercker.

Injuries that year, though, conspired to limit his time. Though he made the All-Star team, he couldn't play. He tore ligaments in his thumb ahead of the game on a slide into third. He remembers spending the All-Star game with a cast on his hand unable to play.

"I just think I hit some bumps in the road," Alborano said.

Overall, he got into 69 games for Virginia that year and hit .305. He then started 1989 at Baseball City and he played much of the season as that club's starting left fielder.

In his 77 games at Baseball City, Alborano hit his league-leading .337 and he won his promotion to AA Memphis.
One of the first pitchers he faced with Memphis, he recalled: Greenville's Steve Avery.

"I remember facing a tough Braves team in Greenville and I'm like 'Wow, this is different than class A,'" Alborano said. "From there, we went on to Jacksonville, ... I had like a reality check there in '89 because I really saw a difference in the caliber of pitching and the playing.

"I thought AA was a really big difference from class A," Alborano said.

Alborano appeared in 15 games down the stretch for Memphis that year. He hit .250. He then returned to Memphis for the full season in 1990. He recalled getting used to the pitching more, but he also wasn't starting every day.

Alborano served as an extra outfielder, a designated hitter and as a pinch hitter. The team had outfielders who could track some fly balls better than he could. He hit .255 in those roles over 81 appearances.

Alborano recalled frustrations on the field that year, but also joys - both on and off it.

On the field, the frustrations showed on a particularly cold and rainy night. Alborano came off the bench to hit and then play in the field. He struck out.
Alborano walked out to left field upset and kicking the grass. He recalled his manager Jeff Cox quickly responding and setting Alborano straight: The fans deserved better.

The biggest mid-season joy came with the birth of Alborano's son, Christopher. Memphis was on the road, but Alborano's wife was back in Memphis.

Memphis was back in Greenville, but Alborano won permission to fly back to witness his son's birth. Alborano recalled his own father advising against it.

Alborano's father, also Peter Alborano, spent time in the minors himself in the 1950s. His advice, the son recalled: Alborano's wife could take care of it.

"He's like 'Pete, you're leaving the team? I would never leave the team,'" Alborano recalled of his father's reaction. "I'm like, 'Dad, it's different now. The manager gives permission to see the birth of your child.' He was old school."

On the field, the joys included a big home run and a league championship. Alborano hit two home runs for Memphis that year, one of them off future major leaguer Denny Neagle, he recalled. Memphis also went on to win the championship over Neagle's Orlando SunRays. Alborano still has the ring.

Alborano then went into the home stretch of the career before going out on a big game. (Go to Part 4)