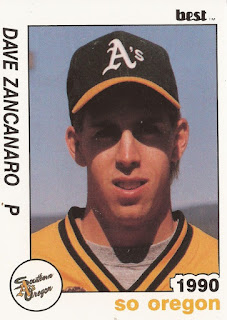 He lost more than two seasons to shoulder surgery but came back. By 1999, he was still pitching and trying to fulfill those initial high hopes.

"My goal is just to stay healthy this year," Zancanaro told The Hartford Courant after getting promoted to AAA that year. "If it works out that I can continue and make it to the majors, that would be icing on the cake."

Zancanaro played two more seasons, making 10 seasons in all. His comeback never took him to the majors.

Zancanaro's career began in 1990, taken by the Athletics in the first round, 34th overall, out of the University of California, Los Angeles.

At UCLA, it was Zancanaro's arm that caught the attention of scouts. He threw 90 mph. He also had a good change, The Los Angeles Times wrote. He also played outfield.

"I would like to pitch, and that's what the scouts are looking at me for," Zancanaro told The Times. "I like to start because it's like you have control of the game. But I like to relieve, also. And a few scouts have asked me if I would be interested in playing the outfield. I just want to play."

Zancanaro soon was taken by the Athletics. He was also taken decidedly as a starter. Zancanaro was one of four pitchers selected by the club that year dubbed "The Four Aces" for their potential to make the Oakland rotation.

With those expectations, Zancanaro started at short-season Southern Oregon, getting time at high-A Modesto. In 14 outings between them, he turned in a 4.40 ERA.

Zancanaro didn't return to the field until 1995, getting 16 starts at single-A West Michigan. He made it back to AA Huntsville in 1996.

For 1997, Zancanaro signed with the Padres, spending most of the season at AA Mobile. He also got three starts at AAA Las Vegas. He spent 1998 and 1999 with the Yankees and AA Norwich and AAA Columbus.

He then finished out his career with the Cubs at AAA Iowa in 2000 and the Cardinals at AAA Memphis in 2001. He never got the call to the majors.