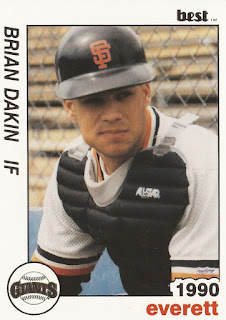 There was one team the Giants were comfortable with that year in 2008, the Padres, winning 7 of 10 from the team by early August, according to KSBW sports anchor Brain Dakin.

But, as the Giants went for the series sweep at San Diego, it wouldn't be that simple, Dakin told those at home.

"They had to get past their nemesis Greg Maddux," Dakin told those at home. "The Giants hadn't beaten Maddux since 2003."

Maddux went on to beat the Giants that day, notching his 352nd career win. The team he beat was also a team that Dakin knew, not so much on the anchor level, but on the career level.

Dakin once was a player in the Giants organization, playing in all of 35 games in a single season of short-season ball in 1990, his baseball career coming to a quick end.

That professional baseball career began in June 1990, with his selection by the Giants in the 36th round of the draft, out of the University of San Francisco.

At the University of San Francisco, Dakin doubled and scored the winning run in the 10th inning.

With the Giants, Dakin played at short-season Everett. He arrived as an infielder and catcher, but ended up playing mainly third base and no catcher.

With Everett, Dakin hit .243, with two home runs and 15 RBI over 35 games. Those numbers ended up being the extent of Dakin's professional baseball career.

From there, though, Dakin started his new career, in media. He started in radio as as producer and fill-in reporter in 1994, according to his LinkedIn profile.

By 1998, he was at KSBW, serving as an anchor to photographer for nearly a decade. More recently, Dakin has served as a freelance reporter for Comcast Sportsnet Bay Area.