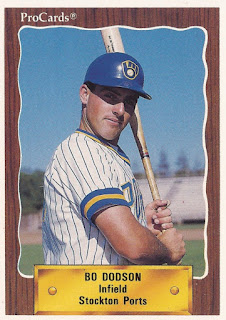 In his second year playing baseball as a professional, Bo Dodson still marveled at his job, he told The Los Angeles Times in June 1990.

"I don't think it's really sunk in yet that this is what I do for a living," Dodson told The Times. "I thought it sunk in last year, but I realize now it didn't. It's still kind of hard to believe."

Dodson spoke to The Times as he prepared for the California League All-Star Game as a member of the high-A Stockton Ports. It was his second-straight year as an All-Star, having won that honor in the rookie Pioneer League the year before.

He went on to continue playing as a pro for the next decade. He made it as high as AAA, but he never made the majors.

Dodson's career began in 1989, taken by the Brewers in the third round of the draft out of Christian Brothers High School in Sacramento, Ca.

Dodson started with the Brewers at rookie Helena. He hit .310 over 65 games there. He also earned a young fan. An 8-year-old girl there used her allowance to buy Dodson snacks for road trips, according to a New York Times book synopsis.

He moved to the Red Sox and AAA Pawtucket for 1996. He hit .344 in 82 games there. He knocked in runs on a single and a double in June game. He won Player of the Week honors in July.

Dodson's last season in the minors came in 1998 at AAA Rochester with the Orioles. He then returned home to Sacramento and played for and later managing his hometown independent team.