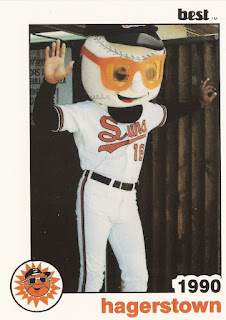 The Blue Jays flew into town, but Sunny stayed.

As the Hagerstown Suns switched affiliations in 1993 from the Orioles to the Blue Jays (and from AA to single-A) the team's mascot made the switch, too, according to The Baltimore Sun.

"Sunny." the Suns' aptly named mascot, prepared for that season and would "be bedecked in Toronto Blue Jays blue," The (Baltimore) Sun wrote.

Three years earlier, Sunny was still bedecked in Orioles orange, or at least a Suns jersey and orange sunglasses.

Or at least it would make sense that the baseball-headed mascot on the 1990 Best card is Sunny. The card itself doesn't give the 1990 Suns mascot a name. (The back is the team checklist)

Though Sunny stayed, he would soon be joined by a new Suns mascot, fit for the new affiliation. "Jay Jay" came on the Hagerstown scene by mid-summer.

By September 2000, Jay Jay seemed to have Municipal Stadium all to himself. It was Jay Jay whom The Hagerstown Herald-Mail described as strolling around the stadium. Sunny was nowhere to be seen.

Soon, though, Jay Jay would be gone himself. The Suns named a new mascot for 2001 to coincide with the team's newest affiliation, the Giants. The Suns' new mascot was a Woolly B., a woolly bear caterpillar.