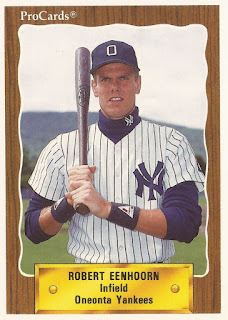 Robert Eenhoorn knew what he wanted to do. He wanted to play baseball. In the Netherlands in the late 1980s, that wasn't the easiest task, he explained to The South Florida Sun-Sentinel in July 1990.

"Baseball is popular over there, but not that popular," Eenhoorn told The Sun-Sentinel. "I played both soccer and baseball when I was a kid, but as I got older, I had to be honest with myself and go with the sport I really love. And to do that, I had to move to the United States."

Eenhoorn spoke to The Sun-Sentinel weeks into his professional career at short-season Oneonta. The Dutch infielder went on to make it all the way to the majors. He saw 37 games total over four major league seasons with the Yankees and Angels.

He's since gone on to return home to the Netherlands to promote the game further there to the country's youth as a coach in the Olympics.

Along the way, he's had to come back from personal tragedy, namely the 2003 loss of his 6-year-old son to cancer.

Eenhoorn's professional career began in 1990, taken by the Yankees in the second round of the draft out of Davidson College in North Carolina.

Eenhoorn's first big look internationally came with the Dutch national team at the 1988 Olympics. He came to the United States for the 1990 season at Davidson, where scouts took notice.

Eenhoorn started his career at Oneonta. He hit .268 over 57 games. He then played a shortened 1991 between the rookie Gulf Coast League and high-A Prince William.

He first made AA Albany-Colonie for 60 games in 1992, then hit AAA Columbus in 1994. Eenhoorn made his debut in the Bronx in April 1994. He saw three games, picking up two hits in four at bats.

Eenhoorn returned to the Bronx in May 1995 after the Yankees' regular shortstop Tony Fernandez went down with injury, The New York Times wrote.

His appearance that year was significant in that he couldn't hit, according to The Times. He went 0 for 7 in two starts at shortstop and the Yankees looked elsewhere, to young Yankees prospect Derek Jeter.

"The weird thing with him was, although he was taking your job, you were still pulling for him," Eenhoorn told The Times later.

Some of his final playing time overall came in the 2000 Olympics for his home country of the Netherlands as a player-coach.

By 2001, Eenhoorn was managing the Dutch national team, helming the club in the 2004 and 2008 Olympics. It was in 2003 that he lost his son. Years later, Eenhoorn spoke about his son's passing to The Times.

"In short, when my son was sick, I kind of told him that you never give up," Eenhoorn told The Times in 2009. "And he kept saying that until the very end. So when he passed away, I feel I just owe it to him to never give up."

Eenhoorn became the team's technical director in 2009. In 2011, the team won the Baseball World Cup. He and others received knighthoods from the Netherlands' Queen Beatrix.

"MLB organizations recognize that today there's talent in Europe, too," Eenhoorn told ESPN.com before the 2011 Cup. "Back when I signed, there were maybe three organizations that even scouted internationally. And nobody looked at Europe. These days, when we stage an event there are 17 or 18 organizations that come check it out."
1990 Minor League Tally
Players/Coaches Featured: 2,132
Made the Majors: 921-43.2%-X
Never Made Majors:1,211-56.8%
5+ Seasons in the Majors: 391
10+ Seasons in the Minors:228
Posted by Steve78 at 5:25 PM