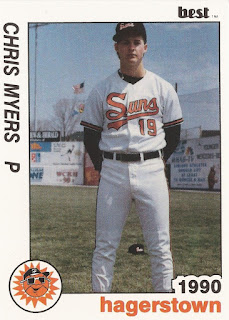 Chris Myers told Orioles director of player development in early April 1990 that he didn't want his age to hold him back, Melvin told The Baltimore Sun.

Myers, still just 21, needed more time at AA before being moved up, something that wasn't unusual for young pitchers in similar situations, Melvin told The Sun.

"We did the same thing with (Bob) Milacki two years ago," Melvin told The Sun, "and it worked out fine."

But, while Milacki made the majors, pitching in a total of eight seasons, Myers never did make the majors in seven seasons of pitching. Myers' big league resume consisted of only a September call-up, one where he was told not to report.

Myers' carer began with promise, taken by the Orioles in the first round, seventh overall, in the 1987 draft. The Orioles selected him out of Plant High School in Tampa, where he'd gained a reputation as one of the state's top prospects.

Myers started with the Orioles at rookie Bluefield, starting 10 games. He went 3-2, with a 2.32 ERA.

He started 1989 with time in spring training, throwing a scoreless inning in one game. But he was sent back to single-A for the start of the season, at Frederick. He got 21 starts with a 3.99 ERA and a 8-10 record. But he also saw AA, moving up the year Hagerstown also moved up. He went 4-2 there in six starts, with a 2.56 ERA.

Back at Hagerstown for 1990, instead of Rochester, Myers went 6-11 in 21 starts. His ERA increased to 3.44. That ERA was pushed up in a late August start, where he gave up five earned runs in 4.1 innings of work against Albany.

That September, he got his call-up to Baltimore, but not really. According to The Sun, the Orioles called up Myers and two other players, but told them not to report.

Myers did make Rochester for 1991. He started 21 games for the AAA club, going 8-7 with a 4.49 ERA. By late August, though, Myers was traded to the Expos for Richie Lewis.

Myers, though, played just one more year in affiliated ball, 21 outings in 1992 across three Expos levels. He then is credited with returning for a final season in independent ball in 1995, with eight outings at Adirondack and Florence, ending his career.