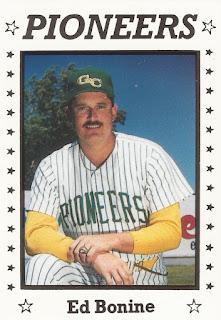 The two-day Nevada high school baseball tournaments were likely moving to three-day affairs in 2007 and Nevada Interscholastic Activities Association executive director Eddie Bonine was all for it, according to The Pahrump Valley Times.

"I'm a baseball guy," Bonine said, according to The Times, "and I'm in position to exercise my knowledge and be heard. ... It's a safety concern, so I want to move forward with it."

Bonine's baseball career began in 1979, taken by the Astros in the 15th round of the draft, out of Grand Canyon University.

From there, Bonine turned coach with the Giants. In 1988, he served as a coach at Everett, moving to Pocatello for 1989, according to his ProCards card. He then stayed in Pocatello for 1990, with Gate City.

In 2003, Bonine saw his son, also named Eddie Bonine, follow him into the pros. In June 2008, the younger Eddie Bonine debuted in the majors.

Just after he made the bigs, the younger Bonine told MLive.com his father helped him with his mechanics.

"I grew up around professional baseball players," the younger Bonine told MLive.com. "My dad was a pitching coach in the San Francisco Giants' farm system. I was around the game, and so this stuff does not feel uncomfortable to me. That made baseball a way of life for me."