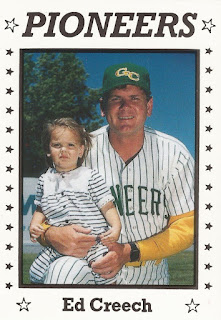 Ed Creech joined the Giants after the Pirates let him go in 2007, The Moultrie Observer wrote.

He's been a top scouting adviser in San Francisco since, continuing into 2015. Along the way, the Giants have won three World Series titles.

"I was in the right place at the right time," Creech told The Observer. "I've been blessed."

Creech joined the Giants after more than 30 years in the game. He spent six seasons as a player in the minors and he's spent much of his time since as a scout, minor league manager and coach.

Creech's long career in baseball began in 1973, taken by the Expos in the second round of the draft out of Mercer University. Creech has also been referred to as Pat Creech.

Creech then embarked on his post-playing career. By 1983, he was manager at rookie Calgary. In 1985, it was short-season Jamestown.

In 1986, Creech was a scout, leading the Expos' efforts in the southeast. He tried managing a couple more times, including at rookie Gate City in 1990, but then turned exclusively to scouting.

Creech's Pirates drafted Neil Walker in 2004 and Creech compared Walker favorably to Hall of Famer Gary Carter, according to The Beaver County Times.

"Neil reminds me of Gary a lot," Creech told The Times, noting he'd played with Carter in the minor leagues. "They are the same type of person and that's why I think Neil will make a quick transition into professional baseball."

Creech then moved on to the Giants after leaving the Pirates in 2007. In 2015, Creech was inducted into the Professional Baseball Scouts Hall of Fame in Charleston.

After joining the Pirates in 2001, Creech explained to The Times how important he believed scouts are.

"I feel scouting is the lifeblood of any organization," Creech told The Times. "In my mind, there are no more important people in your organization than the area scouts who go out and find the talent in the amateur ranks."