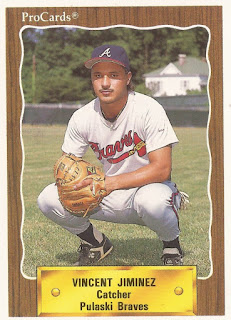 Vincent Jiminez' high school career at Rockdale High School was one for the school's record books, according to The Rockdale Reporter.

Jiminez hit 30 home runs for the school, knocked in 100 runs, among other records that still stood in 2014, The Reporter wrote. He also hit two grand slams - in consecutive at bats.

The occasion for The Reporter's recounting Jiminez' high school highlights was his induction into the school's Hall of Honor that year.

Jiminez' high school work was enough to get the notice of the Braves, taken by the club in the 11th round of the 1989 draft out of Rockdale.

But, while Jiminez' high school impact has been lasting, his pro impact was more fleeting. He played three seasons. He never made AA.