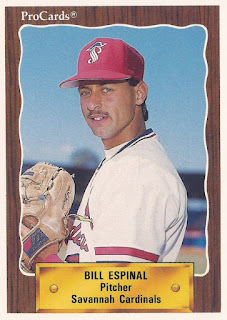 Pace Univeristy hurler Willie Espinal took down the North Carolina Tar Heels with a complete-game in this March 1989 contest, striking out four and allowing no earned runs, according to The North Carolina Daily Tar Heel.

"They through a first-class pitcher at us," Roberts told The Daily Tar Heel.

Espinal went on from Pace to turn pro later that year. His pro career ended up lasting three seasons. He never made AA.

Espinal's pro career began when he was taken by St. Louis in the 40th round of the 1989 draft out of Pace University. Espinal has also gone by his more formal names, William Espinal and Bill Espinal.

He went to Pace after playing his high school ball at New York City's Cardinal Hayes High School, where he he helped his team to the 1985 city-wide championship.

He helped his team earlier that year with a grand slam in an 18-2 win over rival All Hallows. Later on, in the city Catholic schools championship, the pitcher Espinal picked up his ninth win  of the year in a 5-2 victory. The club then went on to take the city crown.


Years later, in 2012, Espinal was back at his old school cheering his team on, according to the school's Web site.

At Pace, Espinal pitched more than 223 innings and struck out 166 batters from 1986 to 1989, still fifth and sixth all-time at the school respectively. He saved six games.

With the Cardinals, Espinal started at rookie Johnson City. He got into 32 games in relief, picking up two wins and 12 saves. He came in with an ERA of 2.13.

He moved to single-A Savannah in 1990. In 46 outings there, he had a 2.63 ERA and 13 saves. He got tagged with a relief loss in an April game, giving up one earned. His fourth save on the year came in a May contest where he started with a three-run lead and gave up two runs.