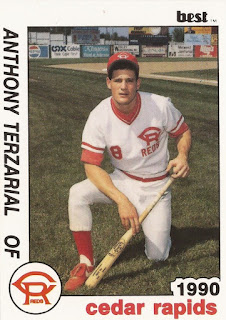 Tony Terzarial saw himself improving from his first junior college season to his second, according to The Chicago Tribune. His coach at Triton College Bob Symonds thought the same.

"He's got all the tools, but he needed to play to develop his talent," Symonds told The Tribune in May 1988. "I like tools, but you have to be able to use them. That's what he's learned."

Terzarial soon learned to be a pro, signing with the Reds after the college season. Whatever he learned, though, it wasn't enough. His professional career lasted just three seasons, never getting above single-A.

With the Reds, Terzarial started at rookie Billings, the outfielder getting into 61 games, hitting .227. He moved to single-A Greensboro for 1989, hitting .234 in 83 games.

One more season, though, and Terzarial was done. He played 44 games with single-A Cedar Rapids, hitting .190, ending his career.

Terzarial has gone on to play softball in his home state of Indiana. He has also served as a hitting instructor.

In 2001, Terzarial played with a softball team called Bridges Scoreboard and his coach Jeff Bridges was happy to have him and others on the team, according to The Northwest Indiana Times.

"I've always said that Bob Weinmann, Zac Wells, Tony Terzarial and Tim Dupin are the best outfield around," Bridges told The Times. "I'll take those guys over anybody."