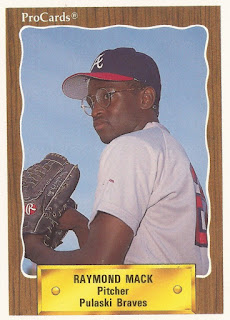 A relieved Ray Mack spoke to The Palm Beach Post in September 1994.

"Tonight," Mack told The Post, "will be the first time I can sit down and eat a meal with no problem. There were a lot of ups and downs, but it's finally over with."

Mack, by then a former minor league baseball pitcher, was relieved because he'd just gotten out of perhaps the biggest kind of jam that anyone can get into. He had just been acquitted of murder.

It was May 2, 1992, that the Braves farmhand was accused of visiting a prostitute and then getting into an argument over all of $20. It was during that argument, authorities later alleged, that Mack took out a gun and shot the woman in the head.

He was ultimately acquitted.

Compared to the day he was found not guilty, the start of Mack's brief baseball career had to have seemed like a lifetime before. It began in 1989, taken by the Cubs in the 25th round of the draft out of Sumter High School in South Carolina. He's also credited by his full name, Raymond Mack.

Mack arrived in the Braves system for 1990 and he turned his pitching around. He played between rookie Pulaski and rookie Idaho Falls. He played in 19 games in relief, saving four games and posting a 2.08 ERA.

Mack moved to the single-A South Atlantic League with Macon in 1991. That same league was home to a team from Mack's hometown, Sumter.

He got to pitch in front of the hometown fans in early May 1991 and the nerves showed, according to The Sumter Item. Mack gave up two runs in an inning of work in that game.

"I feel I've got a good chance of coming back in (in the series)," Mack told The Item afterward. "I feel like I'll have all the jitters out and then I can do what Ray Mack can do."

What Mack could do on the field, he showed it that year. In 19 outings, he had an ERA of 1.54. He then underwent knee surgery.

It was May 2, 1992, as Mack continued to rehab from that knee surgery, that he was accused of murder. Mack missed drills at Braves camp and his name was soon released as the prime suspect.

He was accused of gunning down the woman, Lauri Rahz, after he and two other men picked up the woman and a second prostitute. The shooting happened in Riviera Beach, Fla., after he allegedly demanded the money back and she refused, authorities told reporters.

Mack was arrested and stayed in custody until later that year, when he was released on bond. His trial came in September 1994. Mack's defense pointed out conflicting statements from several witnesses, according to an account in The Item. The sole witness to the shooting itself was also intoxicated. Mack was found not guilty.