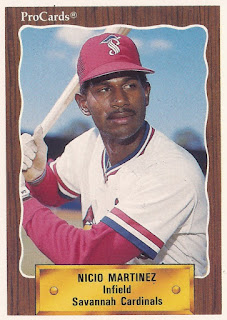 Nicio Martinez tried to spur a come back for his single-A Savannah Cardinals, but it was too little, too late, according to The Savannah Morning News.

Martinez knocked a run-scoring single in the ninth inning of this April 1990 game. And he did it as a pinch hitter. The run cut the Savannah deficit to two, The Morning News wrote. That was where the deficit would remain.

Martinez picked up that pinch-hit single in his third season as a pro. It was also his final season. He made single-A, but got no higher.

Martinez' career began in 1987, signed by the Phillies as a free agent out of his native Dominican Republic.  Martinez' name has also been spelled Nico Martinez.

Martinez played his first year at short-season Bend. He got into 27 games playing both shortstop and outfield. He hit .215 in 65 at bats.

Martinez moved to single-A Clearwater and short-season Batavia for 1988. In 51 games that year, he hit just .152. It was Martinez' final season with the Phillies.