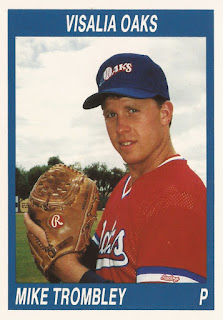 Mike Trombley tried to keep his outing in perspective. He'd just got himself out of a jam in this June 1999 game against the Red Sox. But he also knew it wasn't always like that.

"You take the good times with the bad," Trombley told reporters afterward. "Tonight I just threw some good pitches in a big situation. Nomar (Garciaparra) and (John) Valentin are not easy batters. The other night it wasn't so good, tonight it was OK. Tonight I got ahead of the hitters and got them to chase my pitches."

Trombley spoke with experience. He was in his eighth major league season, all with the Twins. He went on to get time in a total of 11 big league seasons, getting into more than 500 games, almost all in relief.

Trombley's professional career began in 1989, taken by the Twins in the 14th round of the draft, out of Duke University.

Trombley started at single-A Visalia and single-A Kenosha, moving to full time starting at Visalia in 1990. He hit AA Orlando in 1991, even throwing a seven-inning no-hitter.

Trombley hit AAA Porland in 1992, the same year he debuted with Minnesota. He got into his first game with the Twins in August, getting 10 outings, seven starts. He then returned for 44 more outings in 1993, starting just 10.

Speaking to The Wilmington Star-News in spring 1993, Trombley looked back on his time in the pros and how he got to where he was.

"Guys who breeze through college go into pro ball thinking it's going to be easy," Trombley told The Star-News. "But I think because I was 6-22 in college, I went in with no expectations."

In 1997, Trombley credited his new pitch, the split-finger fastball, with helping his game.

"I got sent down last year, and I really kind of wondered where my career was going," Trombley told The Duke Chronicle that June. "But once I started throwing the split finger, it really became a great pitch for me. It's made all the difference-it's made my other pitches better."

Trombley moved to the Orioles for 2000, then the Dodgers in mid-2001. Trombley then finished out his career in 2002, returning to the Twins for five final outings.

Trombley has since gone into the financial services industry in his home state of Massachusetts and had taken up golf, according to The Springfield Republican. He also teaches youth and, as of 2011, had his own local baseball radio show.