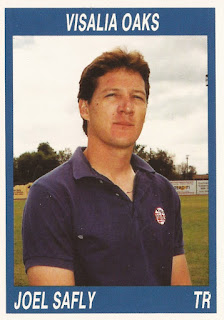 Florida's Lee County School District hired three trainers in 2006 and Joel Safly told The Naples News that it was the students who would be the beneficiaries.

"It comes down to little things like checking out equipment to make sure it's in good shape so no one gets injured," Safly told The News. "I think they've been lucky in the past to not have problems without the regular presence of a certified trainer on-site. I think the parents will see this as a tremendous benefit."

Safly spoke to The News having just been named to one of those three new trainer posts. He took the job after a career as an athletic trainer that took him into pro baseball and then to Florida.

Safly's career as a trainer began in his native Iowa, at Iowa State University. It was there that he got his degree in physical education, according to his Visalia Oaks card.

Safly's career then soon took him to the pros. He served as trainer in 1989 in Florida with the Sarasota Twins in the rookie Gulf Coast League, according to his card. He moved up to single-A Visalia for 1990, serving as trainer there.