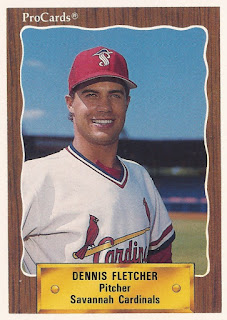 Dennis Fletcher got himself into some trouble late in this April 1990 game. His quick glove got him out of it.

With one run already in, Fletcher had the tying run on second, according to The Greensboro News & Record. That's when he induced a come-backer and ended the game and inning.

"He just hit the ball hard, right at the guy," Greensboro manager Brian Butterfield told The News & Record of the last out. "An inch here or there and he may have had a chance to tie it."

Fletcher snagged that come-backer in his second season as a pro. He went on to get into two more. He never made AA.

Fletcher started his pro career in 1989, taken by the Cardinals in the 28th round of the draft out of the University of Arkansas.

At Arkansas, Fletcher pitched into the seventh inning of a May 1987 regional win, giving up one run. He threw a February 1988 complete game, giving up two runs.

Fletcher played his first season with the Cardinals between the rookie Arizona League and rookie Johnson City. He got into 29 games, starting one. He went 10-0, with a 2.48 ERA and five saves.