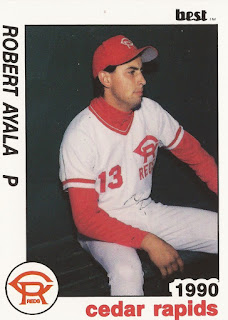 Bobby Ayala tried to explain in July 1995 a season that turned out to be spotty. He'd saved 14 games for the Mariners by that point, but had also blown five save opportunities.

Ayala would go on to save 19 for the Mariners that year, after saving 18 for them the previous campaign.

But the problems that showed themselves early in that 1995 season would persist, showing themselves again in some of the worst possible moments, as the Mariners made the franchise's first playoff run.

And with that, Ayala's major league career that spanned eight seasons continues to hold the ire of an entire fan base.

Ayala's career began in 1988, signed by the Reds as a free agent out of Rio Mesa High School in California.

For 1994, Ayala arrived with the Mariners in a four-player deal. By the end of April, Ayala was Seattle's closer. Holding a Seattle lead through two innings of work against the Red Sox sealed the new title, according to The AP.

"I was very confident when I went in there," Ayala told The AP. "I had great control of my pitches. You can't do any better than that."

Ayala ended up getting into a total of 46 games in that strike-shortened year for the Mariners. He ultimately saved 18 games and posted a 2.86 ERA.

Then came his 1995 season, one where Ayala saved 19, with an ERA of 4.44, seeing his Mariners win the American League West.

Then, in the Mariners' first-ever playoff game, Ayala ended up giving up three earned runs against the Yankees, while getting just a single out. The Yankees won 9-6.

"Every pitch they hit was up," Mariners pitching coach Bobby Cuellar told The Seattle Post-Intelligencer after the game. "He is throwing his forkball too hard and not giving it a chance to break."

The Mariners ended up coming back on the Yankees and making the ALCS and Ayala pitched well enough there. Between games 2 and 4, Ayala went 3.2 innings, giving up one earned run. He also walked three. Both outings came in losses and the Mariners ultimately lost the series to the Indians.

The 1997 season saw Ayala and the Mariners return to the playoffs. Ayala's return went about as well as his first time there. In just one outing, 1.1 innings of work against the Orioles, Ayala gave up six earned runs.

Ayala's postseason performances still had Mariners fans talking years later, with The Seattle Times noting some counted him among the franchise's "irredeemable villains."

Ayala played just two more seasons. In 1998, Ayala returned to the Mariners and got into 62 games. He also lost 10 and had an ERA that exploded to 7.29. His final big league career came in 1999, splitting 66 outings between the Expos and the Cubs. One more season, spent in the minors, and Ayala's career was done.