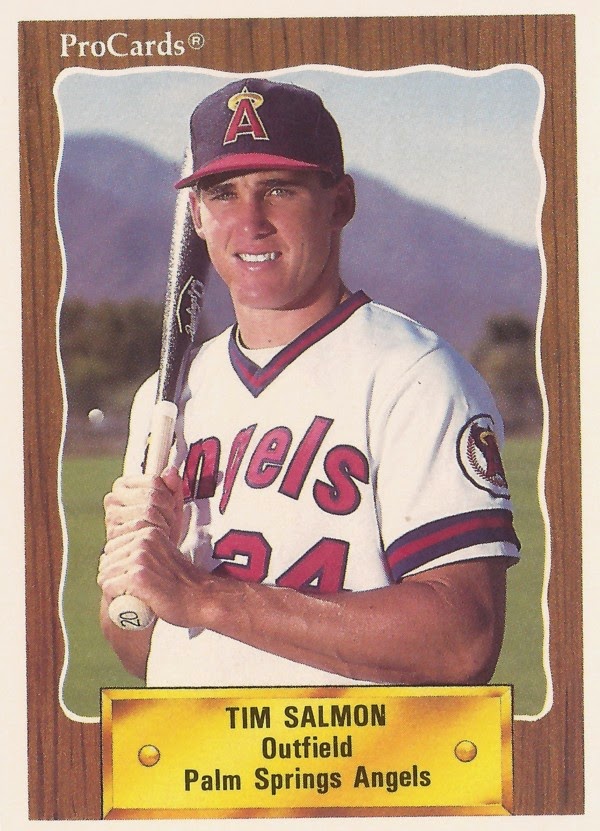 Tim Salmon knew he got it, he told The New York Times afterward.

With one on base, Salmon hit the ball over the left-centerfield fence. The home run proved to be the game-winner - the first of four games the Angels would win in the 2002 World Series.

"I knew the situation, and I knew it was big," Salmon told The Times. "You had a feeling it was going to come down to something like that, the way both teams were playing. It's something I've been dreaming about doing for a long time, and watching it being done from my couch. It's unbelievable."

In all, Salmon played in 14 seasons, all with the Angels. He amassed a career .282 average and 299 total home runs.

Salmon's career began in 1989, taken by the Angels in the third round of the draft, out of Grand Canyon University.

He started at short-season Bend, making it to AA Midland by the close of 1990. He hit AAA Edmonton in 1992, then debuted in Anaheim that August.

At Edmonton, Salmon hit .347, with 29 home runs and 105 RBIs. It was enough, not only to get called up, but to be named Baseball America's minor league player of the year, The Los Angeles Times wrote that September.

"This is definitely one of the highlights of my life so far," Salmon told The LA Times of the award.

The operative clause there was "so far."

Salmon made the majors to stay in 1993. In 142 games with the Angels that year, Salmon hit .283, with 31 home runs. That was enough for another accolade: American League Rookie of the Year. He was the unanimous choice.

"To have the kind of year I had, you can't even describe it," Salmon told The Associated Press. "I did not expect that. This is something you dream about achieving, maybe after four or five years in the game, but not in my rookie year."

Over the next five seasons, Salmon never hit fewer than 23 home runs in a year. He also never hit lower than .286.

In 1998, Salmon hit .300, with 26 home runs. He also played much of the season with a torn ligament in his left foot, proving to be a rallying point for a team that ultimately finished in second place, The LA Times wrote.

"I think a lot of guys are feeding off him," Angels manager Terry Collins told The LA Times that August. "Right now everybody is sore and tired, but they walk in, see him with his foot in ice or the whirlpool and feel a lot better."

After the Angels win in Game 7, Salmon carried the World Series trophy around Anaheim Stadium, The Baltimore Sun wrote. Salmon also spoke to The Sun about being a part of the franchise's first championship.

It's something that's never been said before," Salmon told The Sun. "I'm proud to be part of the team that can say it for the first time."

"Everything in his career, especially the last part, hasn't turned to gold," Scioscia told The LA Times. "He's struggled at times, he's been injured, but how a guy bounces back and carries himself during the tough times is more important than when things are going well. Tim Salmon has played with class and dignity."
1990 CMC-Pro Cards Tally
Players/Coaches Featured: 2,028
Made the Majors: 903-44.5%
Never Made Majors:1,125-55.5%
5+ Seasons in the Majors: 385
10+ Seasons in the Minors:220