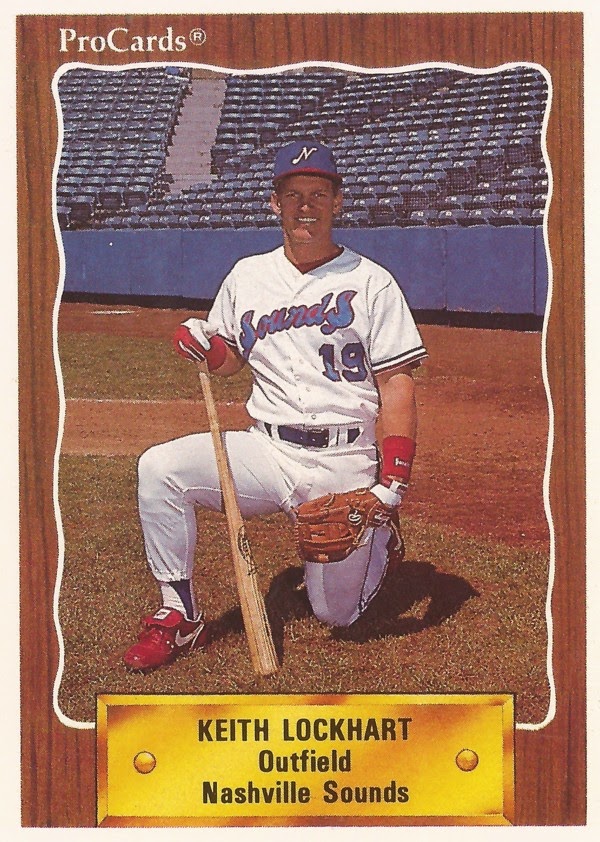 Speaking to a Pittsburgh-area elementary school class in 2001, Keith Lockhart's message to the students was one of perseverance, according to The Beaver Country Times.

Lockhart, speaking to the students as a member of the Atlanta Braves, had spent eight full seasons in the minors before getting his call-up to the big leagues.

"I was very small for my age when I was growing up," Lockhart told the students, according to The Times, noting he was never the best player on his Little League team, his high school team or his junior college team.

"But," Lockhart was quoted as saying, "I kept progressing as an athlete and I kept working hard."

Lockhart progressed enough to get taken by the Reds in the 11th round of the 1986 draft. His first two seasons were at Rookie Billings and single-A Cedar Rapids. He made AA Chattanooga in 1988, where he had a 14-game hitting streak, and AAA Nashville in 1989.

Triple-A was where he stayed until 1994. The Reds had given up on him, he'd been through the Oakland and St. Louis AAA teams. For 1994, the Padres took a chance on him.

After eight seasons in the minors, Lockhart finally made his major league debut. And what a debut it was. After going 1-3 in three brief substitution appearances, Lockhart, described in one account as a "29-year-old minor league journeyman," got his first major league start. He went 2-4, hitting two home runs.

Lockhart stuck with San Diego for 27 games that year, being sent back down in mid-May. But the impression had been made. He caught on with the Royals in 1995, playing 94 games in Kansas City and 44 in AAA Omaha. Lockhart then left AAA behind.

He returned to Kansas City for the full year in 1996, before being sent to Atlanta in a four-player deal that sent Jermaine Dye to the Royals. With the Braves, Lockhart found a home for the next six years, playing in the 1999 World Series, having the dubious honor of making the final out.

By 2002, Lockhart was often a pinch-hitter, making the most of those starts he got. In one May start, Lockhart went 2-3 and hit a three-run home run, helping the Braves to a 7-5 win.

The Braves moved on for 2003, Lockhart signing back with the team that first brought him up. Regarding his time with the Braves, Lockhart told The Atlanta Journal-Constitution, "I played for a great manager for six years, played in the playoffs. . . . It's been fun."

Lockhart played 2003 with the Padres, ending his big league career after a decade in the majors.