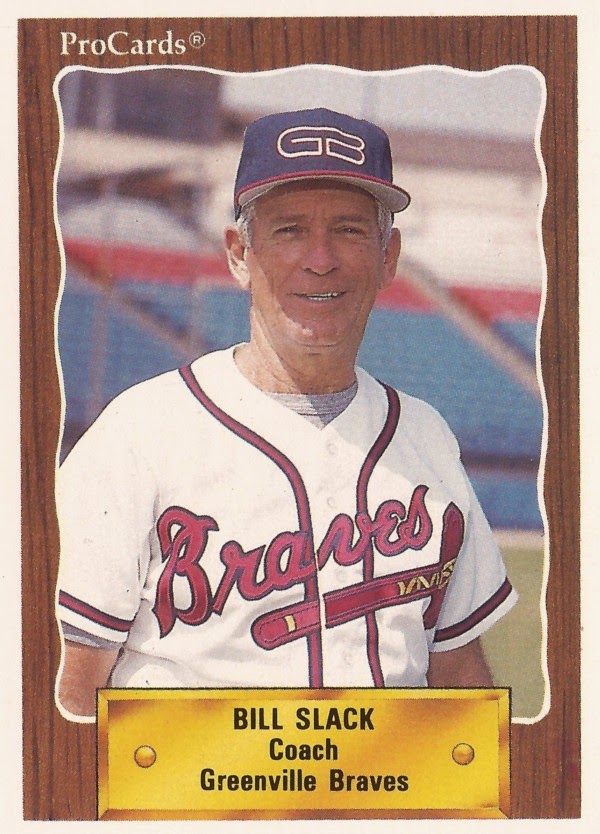 Slack emphasized that point by throwing batting practice, he told The Sun.

"He signed a deal with a bat company that made unbreakable bats and they gave him two. I’m pitching and about the third pitch he hits an outside pitch and breaks his bat. Thought he was going to cry," Slack told The Sun. "I said 'that's what they're going to do to you in the big leagues.'"

By the time Slack got to work with Klesko, Slack had already made a career of sending players on to the major leagues. He'd done it for three decades as a coach and manager in the minors.

Slack's long career in baseball began in 1952, signed by the Red Sox as a free agent out of high school in Sarnia, Ontario.

Prior to that, Slack played hockey for his high school team. He also got time with Buffalo, the minor league team affiliated with the Montreal Canadians, according to his ProCards card.

Slack started his baseball career at Class B Roanoke. He went 15-8, with a 3.14 ERA. He then split 1953 between Roanoke and single-A Albany.

Slack's last regular playing time came in 1960. He never made the majors as a player. Then, in 1961, he started his managerial career at Waterloo in the Class D Midwest League.

By 1963, he was at single-A Winston-Salem. He stayed there for seven of the next eight seasons then at least six more seasons through 1984.

Slack arrived in the Braves system for 1985, watching over players that included former first-round pick Duane Ward. Ward went on to play a decade in the majors.

"He's got a good live arm," Slack told The Palm Beach Post. "I think he's got the best arm in the entire organization."

Slack served as a coach at AA Greenville for 1990. He continued in the Braves organization through 1998. He then moved to the Rangers system, serving as manager at single-A Savannah in 2001, then mid year turning to minor league pitching coordinator duties.

Among the players he worked with in the Braves organization was John Smoltz. Smoltz credited Slack with helping him along, according to The Savannah Morning News.